How many students should there be in class at university? Some people might say that there isn’t an exact number of people because it depends on how the classes are structured. Well, as everybody knows, private universities, though not only, have classes designed for no more than 50 students. IE University is not the exception.

Even though the number above should be the maximum, first-year students, who joined IE  University in September 2021, wonder why they are more than 60 people in a class. Why would university departments tell you that the maximum capacity of classes is 50 students and then place you in a 62-people class?

In a survey conducted in the Bachelor of Communication and Digital Media (BCDM) class, more than 50% of students would rather work in smaller environments because they don’t get the chance to talk, either because they get embarrassed about asking questions in front of a lot of people or just because there is no enough time for all of them to talk, even if they would like to participate. Therefore, how can professors grade students on their participation if they don’t have the opportunity to actively join the class?

Some students of this class (approximately 18%) said that they actually like being a lot because they get to know new people and they can have more friends. Rightly, a student argued that it is true that you can get the chance to know new people if you’re many, but because of the actual number of students, it’s also kind of impossible to get to know everybody since you don’t always get easily along with 60 people and neither do you have the time to talk to them every day. The other 30% stated that they don’t mind being 40, 50, 60, or more in one class. 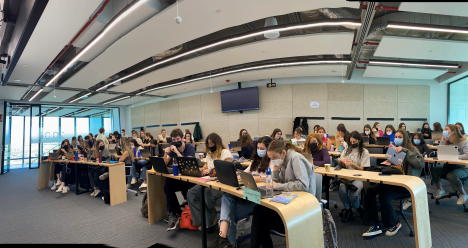 Furthermore, there are concerns about Covid-19 and health safety in class. It is a well-known fact that the pandemic is still playing an active role in humans’ lives and this should not be underestimated in classrooms. Naturally, students and professors are required to wear their masks all-time in class but still, the seats and the tables are small, doors are closed and the air won’t change for the following three hours of the class. So how can this be considered ‘a safe environment’? Only because students and professors need to upgrade their health passports before entering the university doesn’t mean they don’t have any Covid-19 symptoms nor that they’re in good physical condition.

Nevertheless, one of the Communication and Digital Media classes is divided into two parts: one half of the class works one hour and twenty minutes, and the other half works right after them, one hour and twenty minutes as well. Bluntly put, students may either love or hate this class.  The reason why it’s like this is because, compared to all the other classes, during this period of time people don’t make noise, and they don’t talk to each other, thereby they pay more attention to what the professor is teaching.

Can professors choose whether to teach to a class of 60 or 30 people? This is probably one of the questions that people will keep asking themselves without ever getting an answer to. But in the light of this essay, we might begin to believe it is indeed not only a possibility, but also the best way forth. So if it is, why don’t do it for every class so students (and professors) may work better and give the best of themselves every time?

One of the professors who teaches in the BCDM class claimed that last year he was teaching a class of 25 students. He said he had never been able to teach in a better way than in that beloved instance.  Students were paying attention and they felt involved in what they were doing. Can students of this class tell the same? It would be senseless to say so. Being more than 60 people in one class means that you are limited in activities you would like to do, in subjects and topics you want to deepen, and in the heed you want to give to your own work, whether you’re the student or the professor.

However, the main inquiry that is going to bother most people is this one: why do these kinds of universities promise future students something that, in the end, they are not going to maintain?  Last summer, more precisely in June 2021, one student of BCDM class asked explicitly via email how many students there would be in class to their admission advisor. They replied to them by saying: “There are never more than 50 students per classroom and there could be less. I just don’t  know if they plan on dividing the amount of students into groups.”

Now, it is true that for one course the class is divided into two groups, but what about the others?  And what about “never more than 50 students per classroom”? It may be like this for other students in different courses, but at least for the ones in Communication and Digital Media, it is certainly not. And as a matter of fact, there are more negative than positive aspects in all of this.

Will the truth ever come out? Or will students and professors be stuck in this kind of non-one hundred-percent-effective environment?

It is Time to Consider Lottery Admissions in Universities

Picking your campus: the first semester experience of students in Segovia...

Making 2022 Better is in Your Hands