For the last few months every worldwide publisher, magazine, and newspaper has issued a plethora of news articles regarding the rising Russian-Ukrainian tensions. The main players in the issue are Russia, Putin, NATO, and the USA. For now, it is a well-known fact that around 100,000 Russian troops are located on the Russian-Ukrainian border. In turn, Ukraine continues to receive army support from NATO. The latest negotiations between Russian and American deputies have been unfruitful. And all in all, this mess of overlapping and antagonistic information surrounding the conflict has left most of us wondering how it all began in the first place. And the current buildup and escalating nature of the conflict has overshadowed the very roots of such tensions, roots that are crucial for accurately grasping the ongoing situation. This paper will address the forgotten history of the Russian-Ukrainian conflict.

This is a significant era for cooperation and agreements between Russia and Ukraine as two independent countries. The 1990s were a basement for future international affairs. After the dissolution of the USSR in 1991, the giant and powerful country was divided into 15 independent countries including Russia and Ukraine. 90% of the Ukrainian population voted for independence, and the country’s unitarian sovereignty was officially recognized. Having lost power over vast amounts of territory, Moscow Kremlin saw itself forced to forfeit its weapon stocks and crucial military bases outside its updated borders.

After the Soviet collapse, Ukraine turned out to be the third-largest nuclear stockpile worldwide. In the framework of denuclearization, Russia, Ukraine, the U.S., and the U.K. signed a Budapest Memorandum. It held that Ukraine had given up and destroyed its nuclear weapons. In turn, Russia and the States guaranteed to respect Ukraine’s sovereignty, to refrain from the threat of use of force against its territorial integrity.

What is more, Russia’s one of the key naval bases, the Black Sea Fleet, was located on the Crimean Peninsula. This piece of soil is considered to be of strategic interest to both Ukraine and Russia. In 1954, the General Secretary of the USSR, Nikita Khrushchev, determined Crimea as Ukrainian territory. As Russia and Ukraine were only republics of the USSR, this gesture was a routine procedure without political motivation, and the common Soviet fleet remained in Sevastopol, the Crimean capital. In fact, the majority of the Crimean population was Russian. This was a reason why only 54% of the Crimean voters, the least number of citizens compared to other regions, voted for Ukrainian independence in 1991.

There also were several attempts made by both the Crimean and Russian governments to claim the peninsula as independent and bestowed with self-determination. In the end, despite being, legally binding, part of Ukrainian territory, Crimea was granted wide-ranging powers to have its own foreign social and economic relations. In 1997, Russia and Ukraine signed a Treaty Friendship which was aimed at respect for territorial integrity and mutual commitment, and of uttermost importance, allowing the Russian fleet to stay in Sevastopol till 2017.

This chapter of history can be characterized as a warming up before the real battle. Tensions between Russia and Ukraine had been rising throughout the whole decade. This period of conflict was marked from the start by Ukraine’s growing cooperation efforts with the EU and its intention to join NATO. Moscow considered such attitudes anti-Russian and pro-Western, continuing the Cold War trend of seeing a polarized, black and white world in the hands of the Iron Curtain. As a result, the then-President of Ukraine, Viktor Yuschenko, faced difficulties in negotiating with the Kremlin. Still, there was a strong need for consensus in those arrangements as Russia stood as the main supplier of natural gas for Europe through Ukraine. However, in 2005, Ukraine withheld some extra gas intended for other countries as a consequence of the extremely harsh winter. The debtor, however, had promised to meet its contractual transit obligations. Consequently, Russia, as a supplier, cut off all gas passing through Ukrainian soil. So, the Kremlin finally found its bargaining chip on Ukraine’s pro-Western mindset.

What is more, it is important to talk about the two countries’ rhetoric about each other. The majority of the generation Boom regrets the collapse of the USSR. Vladimir Putin, as a born boomer, called the event “the greatest geopolitical catastrophe of the century”, although the 20th century had two world wars, several revolutions, and the holocaust. The Russian president sees the dissolution of the Soviet Union as a loss of enormous power for the Kremlin. For him, ice never melted and the Cold War was still freezing. Concerns about Moscow’s objectives gained attention when Russia invaded and occupied a part of Georgia, a former Soviet republic. This action seemed to be an imperialistic intention of returning assets lost in the USSR’s collapse.

Furthermore, at the 2008 NATO summit in Bucharest, Vladimir Putin mockingly told George Bush, “You have to understand, George, that Ukraine is not even a country. Part of its territory is in Eastern Europe and the greater part was given to us”, considering Ukraine a simple puppet in the Kremlin’s hands. Russian state-owned TV channels transmitted the same message to millions. News reports and talk shows demonstrated Ukraine as a manipulative, and poorly economized Western marionette that cannot remain independent without support. This resulted in falling numbers of positive attitudes toward Ukraine among Russians (from 71% in 2001 to 55% in 2008). In turn, Ukraine started a new policy that made the Ukrainian language a mandatory study in schools and challenged the Russian language’s official status, while a third of the population who consider Russian their mother tongue, feared discrimination. 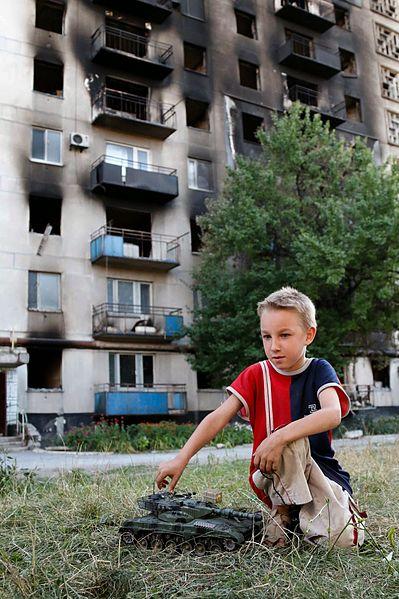 This decade is the worst page of Russian-Ukrainian history, it is this era that has completely destroyed any previous agreements and hopes of diplomatic dialogue between these neighboring countries.

In the beginning, international affairs seemed to be promising. Viktor Yanukovych, the new Ukrainian president, did his best to save the intense situation. He and the then Russian president, Dmitry Medvedev, signed an agreement according to which the Russian fleet could stay in Crimean port in exchange for a 30% drop in the price of natural gas. At the same time, Ukraine had other plans such as moving along with an association agreement with the EU instead of joining the Russian-led Customs Union of Belarus, Kazakhstan, and Russia. Such attitudes were not approved by the Kremlin, and, in August 2013, the Russian Customs Service stopped all goods coming from Ukraine. Moscow went even further and threatened Kyiv with a financial catastrophe. Viktor Yanukovych, as a pro-Kremlin politician, postponed preparations for signing the EU Association Agreement in return for saving economic relations with Russia. Vladimir Putin replied to such a generous step with a more appreciative gesture agreeing to lend Ukraine 15 billion dollars and giving another gas discount. Meanwhile, Kyiv citizens did not approve these treaties and went on protests for closer ties between Ukraine and the European Union. The riots became massive and violent with protestors gaining control of capital buildings. The Ukrainian president, Viktor Yanukovych, fled the country with the help of Russian authorities.

The Kremlin decided to take advantage of an unstable situation in the neighboring country. In February 2014, unmarked military men took control of several important buildings in Crimea, including the parliament and main airports. Ukraine accused Russia of invading an independent country. In fact, Kyiv was right. Later, Vladimir Putin admitted that it was Russian forces who ceased governmental buildings in the Crimean cities. In March 2014, Russia held an extremely controversial referendum asking the population of Crimea if they want the peninsula to become a part of Russia. According to official results published by the authorities, 97% of voters agreed to make Crimea Russian. This plebiscite was controlled by Russian “military intelligence officers” and was organized so fast that there was no room for international observers. Such a shocking violation of Ukrainian and international law was judged by the G7, the EU, and the UN and entailed massive sanctions from the West.

Despite such a strong hit to the Russian economy, the Kremlin did not intend to stop and in turn, backed separatists in the Russian-speaking regions of Ukraine. In April 2014, Ukrainian armed forces clashed with pro-Russian rebels in Donetsk and Luhansk, Ukrainian cities on the border with Russia. Despite 29 Russian-Ukrainian agreements on ceasefire, none of them stopped the bloodshed. Overall, more than 4,000 Ukrainian soldiers were killed, about 10,000 wounded and almost a million civilians had to flee Ukraine. The Kremlin has yet to declassify the death toll, but the estimated number is about 3,500 soldiers. This statistic does not include the 298 souls who died in the infamous passenger jet, Malaysia Airlines Flight 17. The plane was flying above separatist-controlled territory when it was shot down by a Russian missile system called Buk. Despite these dramatic events, armed conflict continued with death tolls and blood is still being spilled unjustly nowadays.

To sum up, since the dissolution of the USSR, Russian-Ukrainian affairs have fluctuated and experienced hardships. The 1990s were a gripping opening, and Russian-Ukrainian history continues into the 21st century. The 2014 annexation of Crimea and the war in the Russian-speaking part of Ukraine may be considered a climax of the conflict. Yet, this piece of soil is not worth either the destruction of brotherhood between Russia and Ukraine or the economic and social crisis that such has brought about in both countries. The consequences of the Crimean occupation and civil war are still present today. The two neighbors have put the peace in the world at stake again. People are polarized and left wondering if Vladimir Putin renders another deadly verdict.

As a Russian, I can plainly say that it surprises me when some people claim that the Kremlin is bluffing and has no intention to begin an armed conflict. The same opinions have been voiced in 2014 but turned out to be wrong. That year, Vladimir Putin seized the opportunity to increase his approval and trust ratings, playing the role of savior from the outer threat, NATO and the States. After the annexation of Crimea and during the war his image was blessed in the eyes of the majority of Russians. I remember watching state propaganda showing Putin as a reliable protector in unstable conditions. Right now, the same scenario is about to happen. The president’s ratings are on the level of 2011-2012, a period when Russia saw massive protests. Thus, it is high time Vladimir Putin started his campaign of a new armed conflict. War’s volatile situation and a vision of threat can praise his figure in the sight of Russians.

However, instead of showing off armies and weapons, the countries should have a round-table discussion and reach a consensus. Never has the ability to negotiate been so crucial and relevant in the 21st century. Speaking from millions of Russians and Ukrainians, I can tell that none of us wants to see fellow citizens dying and suffering in the interests of powerful people.